Elvaston Castle is a historic stately home in Elvaston, Derbyshire, England. The Gothic Revival castle and surrounding parkland is run and owned by Derbyshire County Council.

The centrepiece of the estate is the Grade II* Listed Elvaston Castle. The castle was neglected and did fall into disrepair. Since 2008 has been listed on the Buildings at Risk Register. Derbyshire County Council estimates the castle and estate requires £6.42million of essential repairs.

Elvaston Castle in the past:

Until the 16th century the estate was held by the Shelford Priory. After the Dissolution of the Monasteries the Crown sold the priory and its estates in 1538 to Sir Michael Stanhope of Rampton, Nottinghamshire. Sir John Stanhope (died 1611) granted the estate to his second son, also Sir John Stanhope (d .1638), High Sheriff of Derbyshire, in 1629.

The manor house was built for the latter Sir John in 1633. This Elizabethan style house was redesigned and extended in a grand Gothic Revival style by James Wyatt in the early 19th century for the Charles Stanhope, 3rd Earl of Harrington. Wyatt designed a new wing, a new great hall, and most of the interiors of the castle, but died before work was completed. His designs were carried out by Robert Walker between 1815 and 1829.

Further modifications were made in the 1836 by the architect Lewis Nockalls Cottingham; this work was on the Elizabethan styled south front which was remodeled to match the rest of the now Gothic styled castle.

This was the final modification and created the castle we see today.

During World War II, the house was turned into a teacher training college after the original college in Derby was evacuated.

The college vacated the house in 1947, after which time it remained mostly empty for the next two decades until its sale, starting a steady decline that continues to this day.

Detail from painting of William Barron in Derby Museum
The 3rd Earl, approached Humphry Repton to remodel the grounds of the Castle, however, Repton turned down the commission due to the flatness of the estate, which he found daunting.

Maria and Charles are described as “inseparable and besotted”; the Earl wanted the gardens to be a “private and secluded oasis of great beauty” for himself and the love of his life‘. Barron would spend the next 20 years working on the gardens; he even brought in full size trees to try to give instant gratification to the Earl.

The Fourth Earl and his Countess valued their garden for the romantic seclusion it afforded them, however following the death of their only son aged 4, the couple isolated themselves at the castle, never leaving and forbidding anyone from entering the grounds.
Following the Fourth Earl’s death in 1851, his brother, Leicester Stanhope, 5th Earl of Harrington, opened the gardens to the public. They became renowned as “a Gothic paradise”, and are Grade II Listed.

The estate contains over 50 structures, including stables, kennels, a walled garden, a home farm, several cottages, gate-lodges, an ice house and a boathouse. See our gallery page for a glimpse of the buildings.

Following the Countryside Act 1968, the estate was sold in 1969 by William Stanhope, 11th Earl of Harrington to Derbyshire County Council. The Countryside Act proposed the creation of “country parks”, “for the enjoyment of the countryside by the public”. The council opened the estate to the public in 1970 and have operated it since then, as Elvaston Castle Country Park.

In 1969, Elvaston was also used as a location for Ken Russell’s film adaptation of the D.H. Lawrence novel Women in Love.

The Castle and grounds have a long history and a wonderful story to be told….the Everything Elvaston team.

Use our Contact Us page on this site to tell us your story about Elvaston and its surroundings. We’d love to hear them at any time…

All about Elvaston Castle 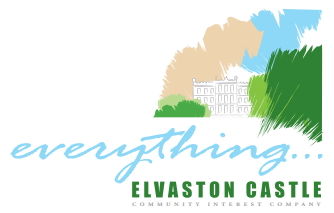 ‘Everything Elvaston Castle is designed to provide readers and visitors with literally everything they’re looking for on one website. Whether your interest is in the estate’s historic past or you want to know more about plans for its future, you’ll find it all here.

You can read about what events and other great things are scheduled to take place in the coming months.

To find out more about Everything Elvaston Castle CIC, click ’About Us’ on this page or get in touch with your comments, thoughts and ideas.

Preserving the past: Promoting the present: Investing in the Future

We are grateful to the photographer Stephen Anthony O'Donnell for his kind permission to use his photographs on our site... 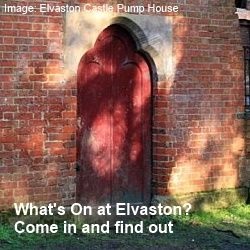 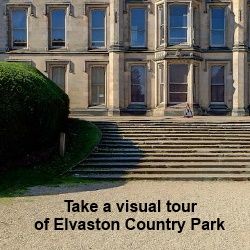 Our corner of the Twittersphere

See even more great houses in the county of Derbyshire…

For information about us email info (at) everythingelvastoncastle